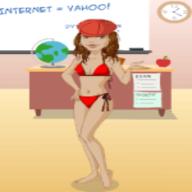 I do adult work such as posing for calandars, Hustler Magazine, and work for an adult site. I also love selling things on Ebay and Ebanned.