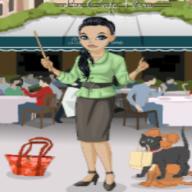 hi im a single mom in my 40's im a hospice nurse and i luv my work. I think its fascinating to learn ideas and views from people all over the world. the internet, if used right can be amazing.