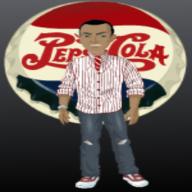 I know almost everything about wrestling so i'm the guy to come to when you have a question. Also extremely great at math. And accounting. Anything numbers and wrestling.