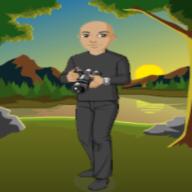 I could say ANYTHING about myself now. You'll have to get to know me. I'm interested in using this internet to connect with cool people across the globe. If your mind is small, (and you know who you are), don't contact me.