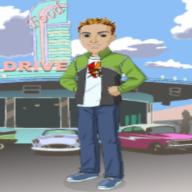 I am a professional filmmaker and writer who has had a number of projects in release and film festivals. I have extensive experience in the world of indie filmmaking and have made all the mistakes and as many right moves.