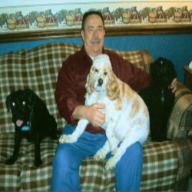 I am soon to be 68 years old, I served in the U.S. Army, in the Army Security Agency from 1959 to 1962! I am married and have two children. the oldest is a School Teacher and the youngest is an Engineer. I am Retired and my hobbies are Wood Working, Gardening, Fishing, And working in my Family Tree, and being on Yahoo Answers. I attend church every Sunday and have a strong beliefe that God is my Creator! Most of what I answer on Yahoo Answers come from my own personal life experiences!