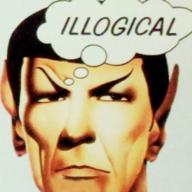 Don't you think Spock gets a bad rap for being logical? Don't let anyone tell you rationalism is bad! If you become very ill do you simply pray for a cure or see a doctor? Emotions have a place but they aren't helpful if you want to separate fact from fantasy. Being a 'seeker of truth' I attempt to strip away all assumptions & wishful thinking before forming an opinion & test my OWN beliefs to destruction if possible. Faith is NEVER enough. Why should it be? If you answer one of my questions without providing me with sound logic, reason or evidence you're gonna get a thumbs down. Especially 'hippy dippy' stuff which sounds profound until you ask the inevitable question: BUT HOW DO YOU KNOW THAT? So often one hears 'It's obvious' or 'because it must be' but IF this is true I need to know WHY! "I believe that only 2 things are infinite: the universe & human stupidity & I'm not sure about the universe' (Einstein)