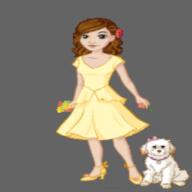 Hello~ My name is Jessica or Jessie Kate, and I'm a lolita. When I say lolita, I don't mean anything to do with the novel or pedophilia, I mean the Japanese fashion that has the same name, but nothing else alike. I'm 17 years old and I love drawing, painting, sewing, cotton lace, tea parties, flowers, stuffed animals, Asian ball jointed dolls, and cute little miniature hats. I love making friends, and I'd love to talk to you. If you'd like, you can email me on here, I check my email about once a day.