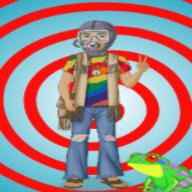 For all answers, I list my source as "my baked noodle." I like The sports, movie, gambling and jokes questions. I live in Portland, OR. I am old enough to know better, and young enough to do it any way. I wrote the poem "5 MINUTES IN THE LIFE OF A WAITER" which you can find by typing in the question "Funniest Restaurant Poem Ever?" It comes in 3 parts so please start with part 1 and Enjoy.