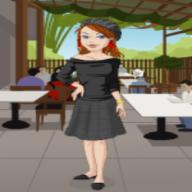 I am a spiritual-atheist. Yes, they exist. I believe in reincarnation. I'm totally fine with other religions, provided that they don't discriminate. I also am very interested in the paranormal. I love the Victorian era, and basically history in general, especially fashion in different eras. Please, if you want to chat, message me first. I am not just going to talk to you. You want to debate, cool. You want help, sure. But let me know first. I've had one bad encounter with a weirdo who I accepted to chat, and I will never do that again.