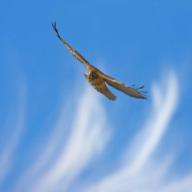 I'm a Vietnam vet (SGT), ex lead guitar rocker, Master's level former mental health professional, 35 year DIY (six houses plus friends & relatives), hardware guy (Ace). Not "Mr. Expert" - my screw-up list would be way longer! I can help you here, that's a good day. If I can learn something from others posting here, even better. The pic, by the way, is a red-tail hawk, like one I see a few times a month, but this one is "Pale Male" in NYC. Look up the story. Get out in the countryside, watch, and listen. Good for the soul. Live long and prosper.